Is Your Nighttime Teeth Cleaning Routine Missing Something? 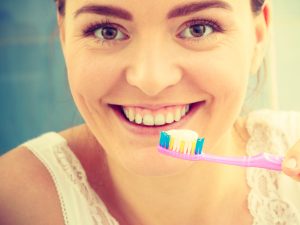 Then as we became more awkward in our teen years, many of us brushed our teeth because to have bad breath or – worse yet – something in between our teeth was the end of the world.

So by the time we reach adulthood, most of us have a teeth cleaning method in place that seems to be working just fine.

The mouth is a warm dark space. And bacteria is a huge fan of warm and dark, where it breeds and multiplies. So just imagine what’s going on in there at night.

Your nighttime teeth cleaning routine may not working as well as you think.

And the results of ineffective teeth cleaning can be a whole lot more serious than bad breath.

Give me a break, you might say. I brush, I floss and I use a mouthwash every night. What else can I possibly do?

So let’s break it down.

It would seem natural that the first step would be brushing, but we’re going to start with flossing.

Flossing is really important. It should be done at least once per day. So if you’re doing it just once, then do it at bedtime.

When you clean between your teeth, you reach plaque that you can’t normally get at with a toothbrush. And flossing also helps prevent gum disease.

But here’s why we’re putting it first in your nighttime teeth cleaning routine.

Try flossing BEFORE you brush.

Most people tend to floss after they brush. It makes sense, right?

Even so, it’s recommended that you try flossing before you brush. Doing this allows you to remove food particles stuck between your teeth and gums so that those parts of your mouth will get a better scrubbing when you brush.

You need 18 inches of floss and some serious technique.

The American Dental Association (ADA) recommends using an 18-inch-long string of floss. By using a longer length, you can wind most of it around your middle fingers to better manage it as it gets used.

And keep in mind that flossing should be done gently.

In your teeth cleaning frenzy, you might be really serious about removing that plaque before it becomes tartar. But you don’t need to punish your gums in the process.

If flossing is tough, look into flossing alternatives.

Don’t despair if maneuvering floss is tough for you. You’re not alone.

That’s why there are things like floss picks where the floss is mounted between two ends so you don’t have to handle the floss yourself. Plus, they have a handy-dandy handle to get the pick easily between your teeth.

And if those don’t work, look into electric flossing machines that spray a jet of water between your teeth. (You might know them better under the brand name WaterPik).

Once the flossing is done, you can move on to the next step in your teeth cleaning regimen.

When it comes to brushing at night, whether you hit the brush shortly after dinner or right before heading to bed depends on whether you’re at higher or lower risk for dental diseases.

Your dentist can help you determine your risk factor.

Do you zip into the bathroom to do a slapdash, so-so job of brushing? Well, don’t.

But don’t scrub them so hard that you run the risk of creating damage.

You should be gently brushing with a soft-bristled toothbrush for a minimum of two minutes to really get at that plaque and to ensure that the bacteria that produces it doesn’t take over while you’re sleeping.

If you don’t remove the plaque, it becomes tartar which can cause inflammation and bleeding gums. This could eventually mean losing teeth.

Once again, it’s in the technique.

Here’s one of the best techniques for brushing:

And while you’re at it, brush your tongue too. While teeth cleaning is the focus, remember that the tongue is no stranger to bacteria.

Is your toothpaste from the dollar store?

If it is, that’s not necessarily a bad thing. As long as it has the seal of acceptance from the ADA.

The ADA has rigorous standards and will only put their seal of acceptance on toothpaste that contains the proper amount of fluoride for certain age groups.

Simply put, rinsing with a mouthwash will give you fresher breath, reduce plaque and cavities, and protect your gums from gingivitis. So why not use it?

Just look for one that is antimicrobial and/or fluoride-based and follow the directions on the bottle.

Then head off to bed. Your nighttime teeth cleaning routine is complete!

If there’s anything else you think should be added to the routine, or if you have questions, let us know.

← What Parents Should Know About Dental Care for Kids Cold Sensitive Teeth? What to Do in the Winter →