A Guide to the Best Mouthwash For Gums 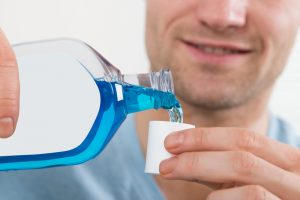 If you’ve been practicing a good dental hygiene regimen your whole life, but you still find yourself dealing with receding gums, or worse, bleeding ones, you’re not alone.

Having either doesn’t necessarily mean you’re suffering from periodontal disease, however.

For example, excessive brushing or rough brushing can cause both. They can also be brought on by a host of other non-oral diseases: everything from diabetes to menopause to a bad smoking habit.

In fact, your family’s genes may simply be to blame!

It’s still important to visit your dentist whenever you see evidence of either, because gum disease, not tooth decay, is the number one cause of tooth loss in adults.

Your Favorite Mouthwash May Not Be the Best Mouthwash for Gums

Your dentist may recommend a mouthwash for you as part of an overall dental hygiene plan to fight back. But not all mouthwashes are created the same — and some can even make the problem worse.

What’s the best mouthwash for gums? The best way to pick one that works for you is to know what ingredients you should and shouldn’t be looking for.

What They Should Contain

The best mouthwash for gums, whether natural or not, should contain at least one of the following ingredients:

What They Shouldn’t Contain

Although not necessarily bad for your health, these ingredients can blunt the efficacy of a mouthwash for gum disease:

What They Don’t Need

Many of the best mouthwashes for gums contain these ingredients, but they won’t do anything for bleeding or receding gums:

What They Can Have

The following ingredients may or may not fight gum disease, and some come with side effects of their own:

Speak to Your Dentist Today

Remember, your mouthwash is only one of the tools you can use to help fight gum disease. But mouthwashes are formulated for several different reasons: they’re not one-size-fits-all.

Speak to your dentist today if you’re suffering from receding or bleeding gums and let them assess just how bad the situation is.

No matter what, you will know that your mouthwash is helping, especially when used as part of a comprehensive dental hygiene plan.